I grew up with my mother telling me I wasn’t good enough at being a woman, that I wasn’t a proper woman. Coming out I didn’t feel confident around Femmes so a lot of my early relationships were with other Butch masculine of centre folk. I was too afraid to even talk to Femmes, but at the same time I was burning for them.

I thought about transitioning in my twenties, I was ready to begin that process. Then I reached a level of being comfortable in some in middle place and that was fine for years.

I don’t recall an exact point of decision to change how I presented, maybe it started with buying gifts for my Femme partner at the time. Buying things for her in this 1960’s girl band style, which she disliked and thinking ‘If I had the guts I would love to wear this’. Eventually I realised: it’s me, I’m the one who this is for, this is what I want to wear, this is my style.

I’ve made a major change in my life, I’ve expanded. Going from being queer and dyke focused, to seeing straight or bi cis men. I used to be a sort of Faggy Butch dyke, now I present as Femme. Being with male people is very It’s different from being with women, but I still still have my own fluid gender identity running in my head. Except ask myself on a daily basis, ‘Am I passing as a woman?’ I wonder, ‘Am I really pulling this off?’

I’ve gone from living an alternative lifestyle to mixing with people who are more mainstream and being judged on that level. I’m dressing very middle class these days, passing in that way, but I’m still feel a dirty squatter punk underneath, it’s like I’m doing research. The weird thing about dressing like this is people assume I’m financially solvent, which I’m not.It’s difficult to explain to people who don’t live on the same terms about things like not having enough money to leave the house, things that can be seen as a sign of failure.

Coming from a community background you are used to working on zero budgets, working for months for free, and so you don’t quite understand how to value that work. If it wasn’t for my circle of support, people helping me, giving me places to stay, giving a financial hand, then I just simply would not be here. There’s no way I could have done the things that I did without that help. A lot of people wouldn’t have had the guts to do what we did.

Faslane, the protest camp outside the military base, I lived there for just over a year. There were kind of two camps within the protest camp: the middle class friends of the earth types, and us Anarchists and queers. It was two different cultures. One was very much about a particular kind of language and way of doing activism, where as us Queers, we got out and actually had conversations with ordinary people.

I never went over the fence onto the military base. At the time I was a brown masculine identified queer person and I just didn’t like my chances. There were people with guns on that base, you know what I mean. It just didn’t seem like a good idea. So I put my energy into support and working more behind the scenes. I felt like I had to do something about these issues that it seemed no one was talking about. The fact of having this military base there in Scotland, or the war in Iraq and our involvement in it.

I have a fetish for straight right wing military men, (laughs) which is a direct polar opposite from what I used to be into. My fetish for the military thing has roots in colonialism and power, I like the immediacy, that I can meet a man straight away and just get down to it and have sex.

I do a lot of things through swinger sites, finding hook ups. It’s not sex work in the totally professional sense, it’s more having dinner  bought for me, or underwear, or heels. Getting my refrigerator replaced or the occasional bill paid. Men do things for me and help me out, I judge them for their behaviour and fuck their asses. My friends say I’m in my ‘Happy Hooker’ phase, I love it, I love being in contact with people in this way.

It occurs to me how much of a survival practice kink is in my life. I’ve only started connecting the dots again recently as an adult. I started very young. I’ve always wanted to try out new things and see what they were like. I was self suspending myself by age seven, doing lots of play with my body and finding this sense of excitement and discovery, That has never stopped.

The sexual conditions where I come from are dire if you are queer, I travel for sex. I remember the first Sex parties I ever went to in other cities decades ago. Part of a queer festival: Queeruption, it couldn’t happen nowadays. A lot of it was in squatted or free spaces, the spaces aren’t there anymore. It was also the energy and politics of the time. I loved it, I loved going there. I met so many people, people who are still my friends now. Being among people who looked like you, felt like you and fucked like you. It was amazing.

I’ve avoided mainstream kink circles, I felt it was too tame and not interesting. I’ve also never had the money for it, there I am with my cheap hand made whips and outfits. I can’t see myself at Torture Garden. I’m not sure I would even want to go there even if I could afford it. But kink has been one of the main joys in my life. I like feral animalistic things, body fluids, fucking in the dirt and the mud, food on the body, sharing food, food in the ass.

I just love being filthy, I love all kinds of filthiness. People say to me ‘You’re so filthy’, but I don’t think of myself as being into extremes, it’s not something I set out to do. I’m just into the things I’m into, that started way before I had any context to put my taste or activity into. It’s just me being myself.

I’ve always resisted so called normality. The idea that I would behave in a certain way, follow a certain path. Marriage, I always saw it as transactional. I don’t see why people make that separation between marriage and sex work, there are strong similarities. except with sex work, I am the free agent. I always wanted to be ‘The Mistress’ rather than the WIFE. To me The Mistress held a different set of associations, of sexual freedom, of excitement, of passion, of being master of my own fate, things that were the opposite of marriage. I suppose the idea was wrapped up in a lot of French turn of the century Romanticism, I’ve watch too much French film of a certain genre.

Being Femme I feel for the first time in my life I understand the female experience. I know there is Femme privilege but when I was a Butch woman, I thought I understood image and sexism. I don’t think I was ever fully awake to what it meant to be female, to realising what women have to deal with day after day.

God, am I even allowed to say that? These days I have a lot of conversations in secret with friends, because there is so much we feel we can’t say in public without being policed, or being shot down in flames.

I don’t know if I would even call myself a sex worker anymore, yes I’ve done it. I started to worry about safety. I was seeing people in my own space, because that’s what I had, but I don’t want to do that anymore. I guess I see my role as an educator, in sexwork, in kink, through a lot of the art stuff I’m doing. I try to have conversations with people, about possibilities, about something beyond ordinary expectations. I spent a lot of time talking to truck drivers lately as I was travelling up and down the country, organising the revolution one person at a time. I’ve been surprised by a lot of peoples views, when I talk to them about going on strike, it’s something people have thought about but they don’t want to lose their jobs.

Sexually I seem to attract those who have a more fluid gender, maybe I haven’t met actual straight people at all. But this fetish for the right wing (laughs), my politics are deeply Anarchist, but I just love military men. Every single one of them has turned out to be kinky, I love educating and changing them having that sense of sexual control. Crossdressing military men, I love the fact that they can’t stop thinking about me, instead of all the other destructive things they are supposed to be doing. I understand there are many reasons people sign up, disempowerment, money, education, it’s not black and white.

Sometimes I describe myself as a bit of a Fag in a dress and these cis men, they understand that. They feel that masculinity in me, they sense it.

They are blown away by me and I tell them: This is queerness, everything I am, you owe to queerness.

Fighting for Space, Love and Loss

The live reading of ‘Switching Focus’ was recorded at this event. You can find out more about the event here. 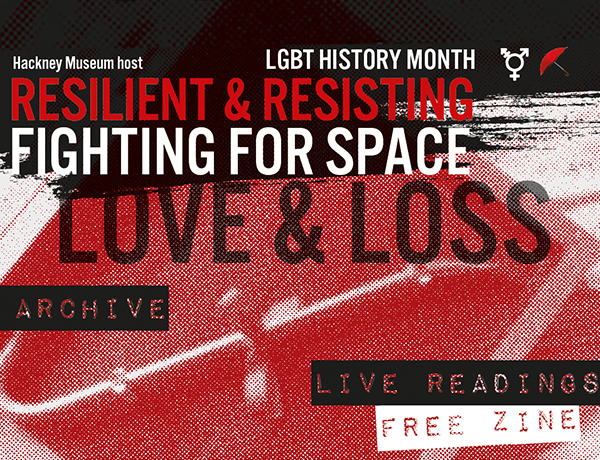