It’s a running joke with my sister, that book ‘Angela’s Ashes’. About the tragedies of a working class Irish family, we laugh about it sounding like a picnic in the park in comparison to our upbringing. I guess I always knew, that if you lived through a lot of trauma then guess what? It left you kind of fucked up.

Shit-head, I called him Shit-head for so many years I forgot his name, I was 16 when we married, I thought I could save him. I have an unfortunate Joan of Arc complex at times, which I have really worked on, no one else is getting saved. Shit-head was a batterer, he controlled me by hitting me. He was also a great one for asserting his legal rights, he actually waved our marriage certificate at me once before he raped me.

I’ve made some errors of judgement in my life, but I have a limited tolerance for bullshit. What ended my marriage, was a number of things, punk being one of them. I saw a punk band on the telly, Headbanger and the Nose Bleeds and it was the most exciting thing I have ever seen. Working class people making a noise and saying ‘Fuck You!’ I thought: if I wasn’t here, I could be there.

Another thing was being kinky. Shit-head was always buying underwear for “me”, that he wanted to wear and asking me to tie him up. I cooperated by tying him spread-eagled on the bed one day, then promptly exercising my new found power, by going out and leaving him there.

After that experiment with my best friend there was no going back sexually either.

I wasn’t ready to call myself (whispers) a Lesbian but I called myself ‘Bi’ for the next 6 years. Until I had made three babies with three different men, then I realised this ‘Bi’ thing wasn’t conjuring up any action with women for me, so I came out.

Except I was a punk and I was a pervy punk, I had to tone down my look, to become visible to lesbians. So the leather mini skirt became a cotton hand sewn mini skirt, the fishnets became woollen tights, my killer heels became monkey boots and so on. Most lesbians were too vanilla for me, I started having some fairly tedious sex with women. I have to say, I’ve got no sense of commitment to boring sex, I just can’t see it through.

I didn’t realise that I was in an abusive relationship at the time, I just thought I was mad. I was having mood swings and depression, and not understanding what the hell was going on in my world. I went to my G.P, and after months and months of telling me my symptoms were hormonal, they finally referred me to a psychiatrist.

I went to see the Psychiatrist wearing my mini skirt, fishnet stockings, boots and a leather jacket. I had on scarlet lipstick and I wore a dog collar around my neck. I didn’t think anything of it, that’s just what I wore, it was that punk, kink vibe. I don’t think the psychiatrist knew what to make of me, but I was wanting answers. I was challenging him to make some sort of sense of me. He looked me up and down and he said ‘Well, I am just going to revert to Freud. I sit here and I look at you in your scarlet red lipstick. I am going to say that you are orally fixated and still in the infantile stages of presentation and relating.’ That was it, that was all I got! Finally I left the relationship I was in, I found my mental health was suddenly a whole lot better.

If you were into SM in those days, you weren’t allowed to be a member of ‘Lesbian Line’, the help line for Lesbians, I went to an interview and got turned down. In the clubs, you were allowed to wear one item of kinky clothing or the vanilla lesbians would get all up in arms. The Lesbian Sex Wars were brutal, they were very divisive, a lot of it was about class. Middle class women trying to control us working class women, asserting their power over us, by policing our behaviour. We all went to the same clubs. You’d have the SM dykes, the little bunch of us that there was, on one side of the room, the vanilla dykes on the other side ofall around the room, and a bunch of bemused gay boys in the middle.

The Gulf War, that first televised all you can eat, watch us bombing the shit out of innocent people in foreign lands. It set something off for us SM Dykes, we had been in our own cold war for a long time, avoiding out and out confrontation with the vanilla dykes.

Something happened when I saw those televised bombing raids, It happened to others in my SM Dykes group too. All of us came to the same decision: that we couldn’t hide in those times, that we had to be out as who we really were.

That night we turned up at the club in all our gear, we were just a small group. I was wearing a black lace bra and dog collar, my girlfriend was wearing a muir cap and a pair of leather trousers. The middle class lesbians surrounded our group, there were about 50 of them and 8 or 9 of us. They were shouting, calling us fascists, child abusers and rapists. They called the police, who came and arrested us for ‘Actions likely to lead to a breach of the peace’. What ever kind of PEACE there was in the world at that time. It never went to court, the police couldn’t find us, I gave them my Grannies name.

I fell into working with survivors, I was on the dole for years, then I got onto a government scheme. In those days they actually trained you. I worked in the queer centre first, giving workshops about lesbian sexuality. I like knowing about my own body. Then there was a job going, working with survivors of sexual violence, I thought ‘I could do that’.

I wanted to give something back, seven years later I was still there.

I’m not good at secretiveness, when I started at that place, it became swiftly apparent to my colleagues, that I knew about all sorts of sexual practices. I had a very strong voice about the right of people to practice whatever they wanted to, as long as it was consensual. In the early years I had arguments with colleagues about sex work, about younger people, about mothers who were survivors, about all the assumptions that were made, but I did it to improve the work environment.

After the release of 50 Shades of Grey, there was a big rise in violence for about nine months. People coming in who had awful things done to them in the name of kink. Part of my work with survivors and staff was saying ‘No, this isn’t kink, this is non-consensual violence’. Working with people who had these experiences and helping them find out where their lines of consent were.

I don’t think it is true that people can fix themselves by working with others, that’s not sustainable. After seven years working in the field of trauma, it was all banging off of me. I was recognising a load of this stuff, but I never saw myself as having a mental health problem. So I had to look at my clients and think ‘Hang on, why have these people been given these labels, these diagnoses? What’s going on here?’

What people were describing to me, were layers upon layers of trauma, but they were being given these labels: borderline personality disorder, schizophrenia, psychosis, bipolar, severe and enduring unipolar depression. Really wild fucking labels and getting the message of ‘You can’t cope with what is going on in your life’. These are people who have had a hideous fucking shit load of  experience, and guess what, they are having a perfectly normal reaction to it.

Maybe in the future we won’t need to label people anymore. Now we’re making the links between trauma and labels and finally understanding, that what we really need to do is address the trauma.

Out and About | Live

Out And About @ Leather Archive

Out and About @ 16 Days Against Gendered Violence

The live reading of ‘Out And About’ was recorded at the Leather Archive, held at the Bishopsgate Institute. You can find out more about the event here. 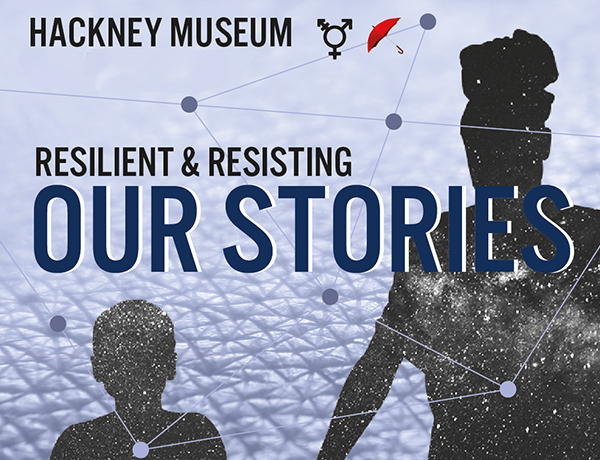