The temporary display of objects as part of
‘Fighting for Space’

As part of this event Resilient and Resisting put out a call for people to contribute objects to be installed among the existing display at Hackney Museum. A micro-exhibition for the duration of ‘Fighting for space’. The call read: ‘Come and celebrate Queer Action past and present by taking up space in the Hackney Museum. What isn’t allowed to be on display? What objects would you contribute and caption to tell a tale of Hackney Queerness?’

In a project about stigma and social change, many conversations have been had about rules, respectability and access. About how there are structures of exclusion, even around the idea of who ‘the general public’ are. When members of the public were invited to contribute the most common question was ‘What counts as an object?’ Very closely followed by, ‘I don’t know what I have that counts as history.’ One of the goals of Resilient and Resisting has been to place our contemporary heritage in relation archived historical material. To make the process of regarding our own stories as history more relatable.

Nestled among the Museums Collection today are several items contributed for the duration of this event, items that tell a tale of Hackney queerness and fighting for space. These include a giant uterus costume: thanks to Jason Barker of Transfabulous transgender festival of the arts and the film ‘A deal with the universe’. From East London Strippers Collective, we have a film, flyers from the collectives events, costume items, and photos of demonstrations that took place outside Hackney Town hall. Protesting the ban on strip club licensing in the borough, and loss of work places. In it’s own glass case is the ‘magical crow bar’ from A.S.S. Advisory Service for Squatters, and a list of the crow bars attributes, including the power to make padlocks turn to dust, and baillifs and cops to call in sick. These were just a few of the objects on display. 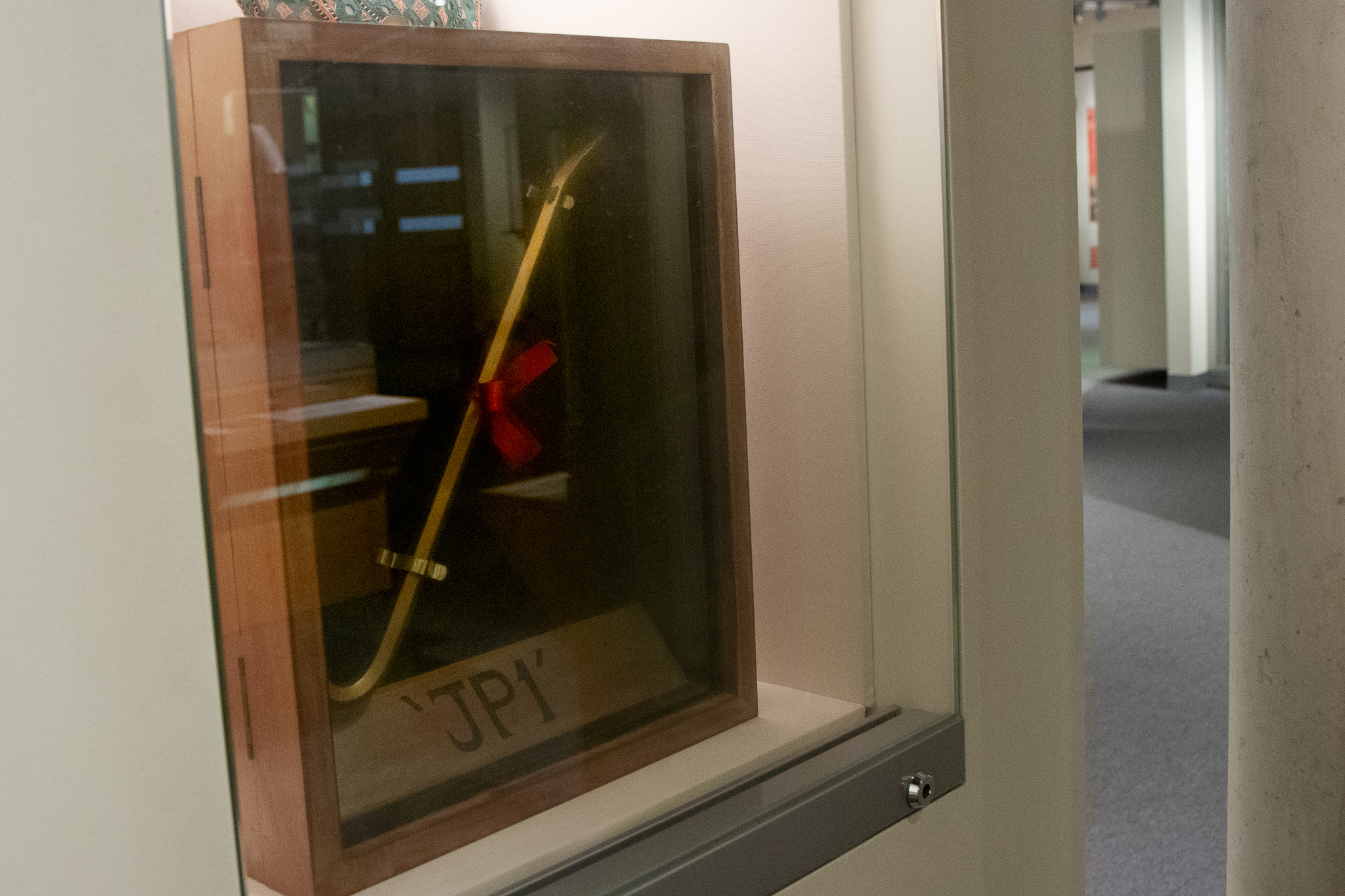 At its touch, steel doors fall off and padlocks turn to dust.

Wave it at a company head and all the lights come on, even if there are no bulbs or tubes and half the wiring is missing. Its magic emanations cause all bailiffs and cops within one mile to phone in sick and go down the betting shop instead.

and homeless people since 1975

many queer squats existed in the Hackney area, and a large proportion of the Resilient and Resisting stories mention squatting as an important aspect of housing, community and a means of survival. 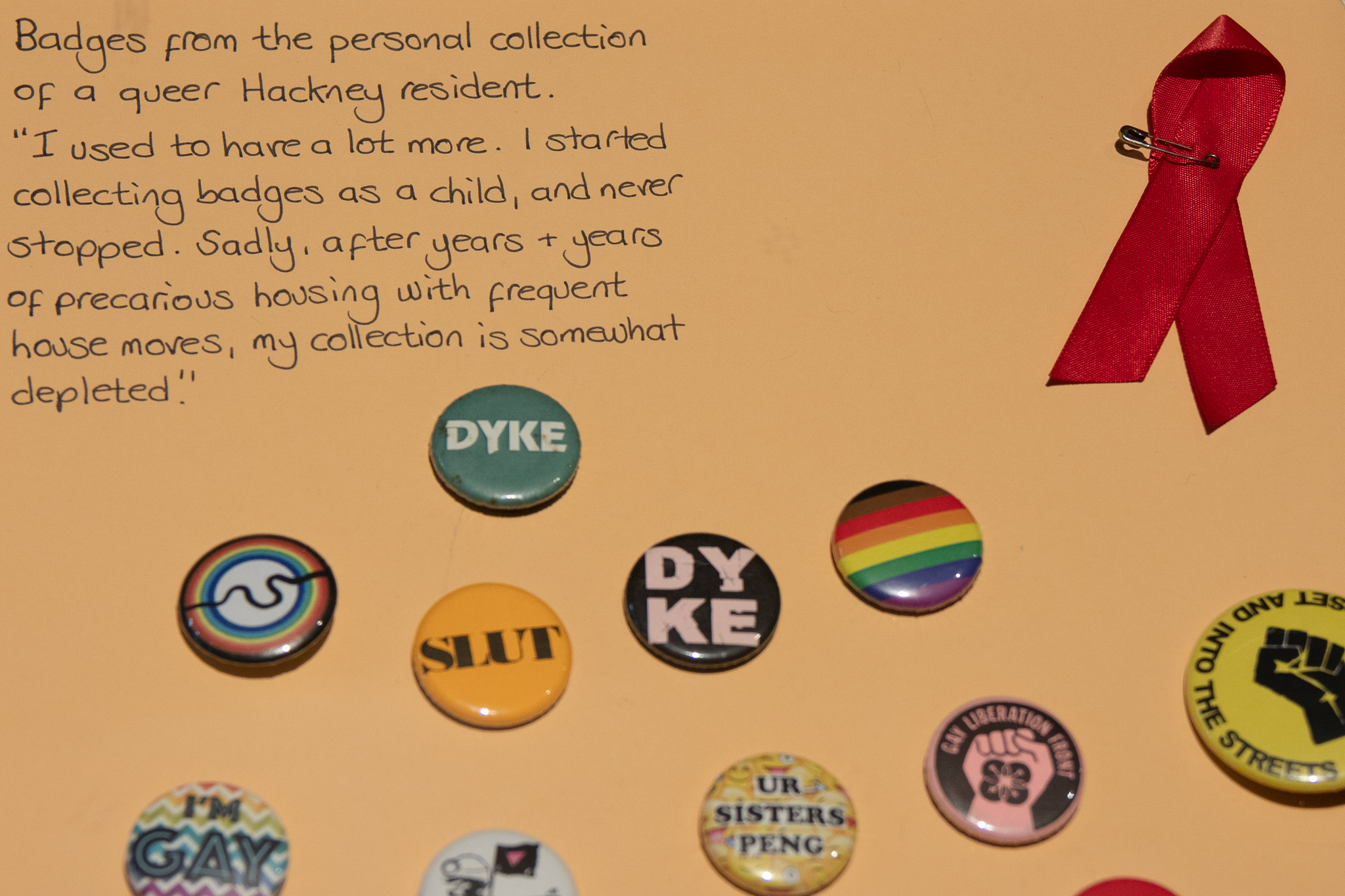 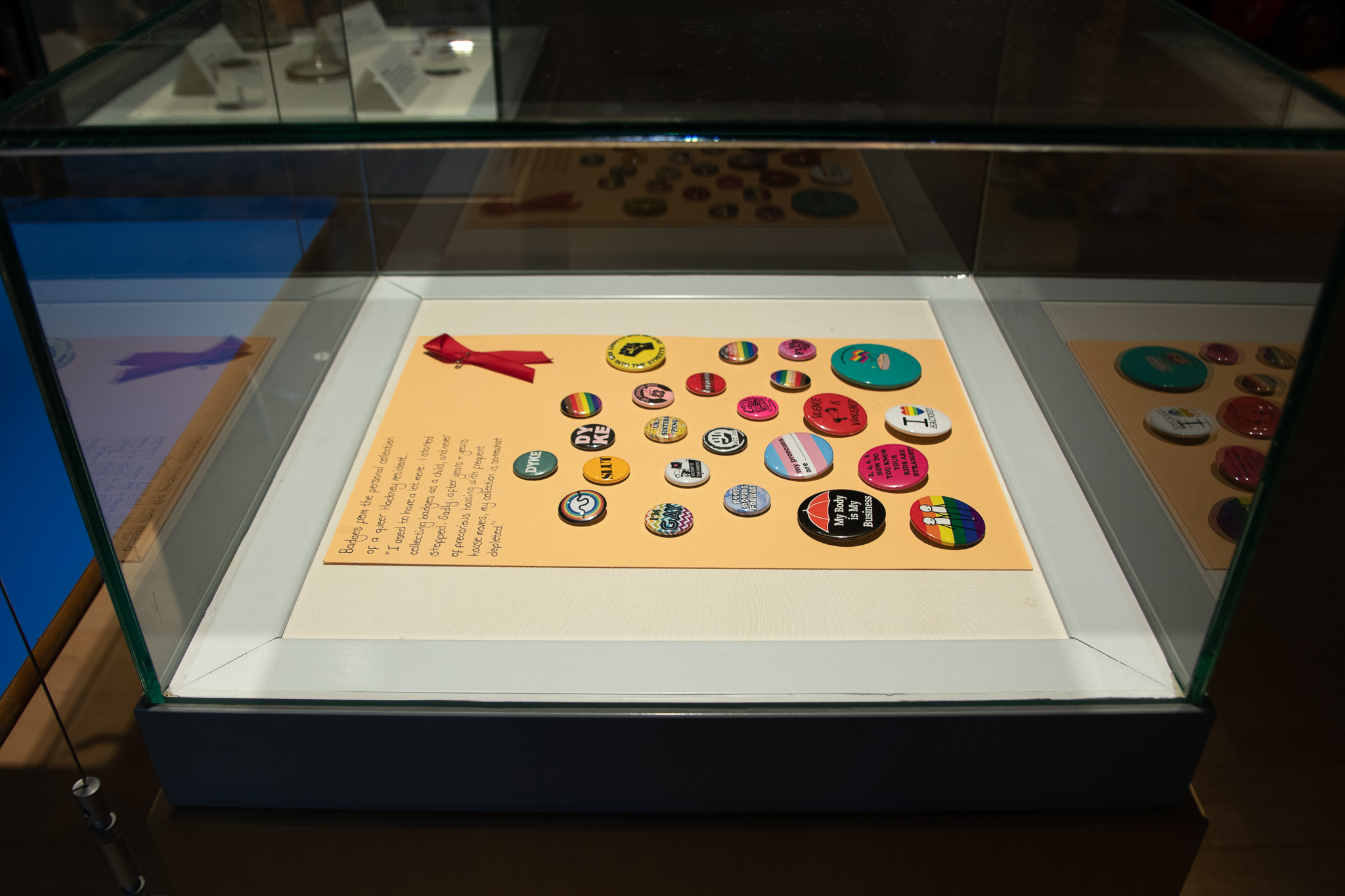 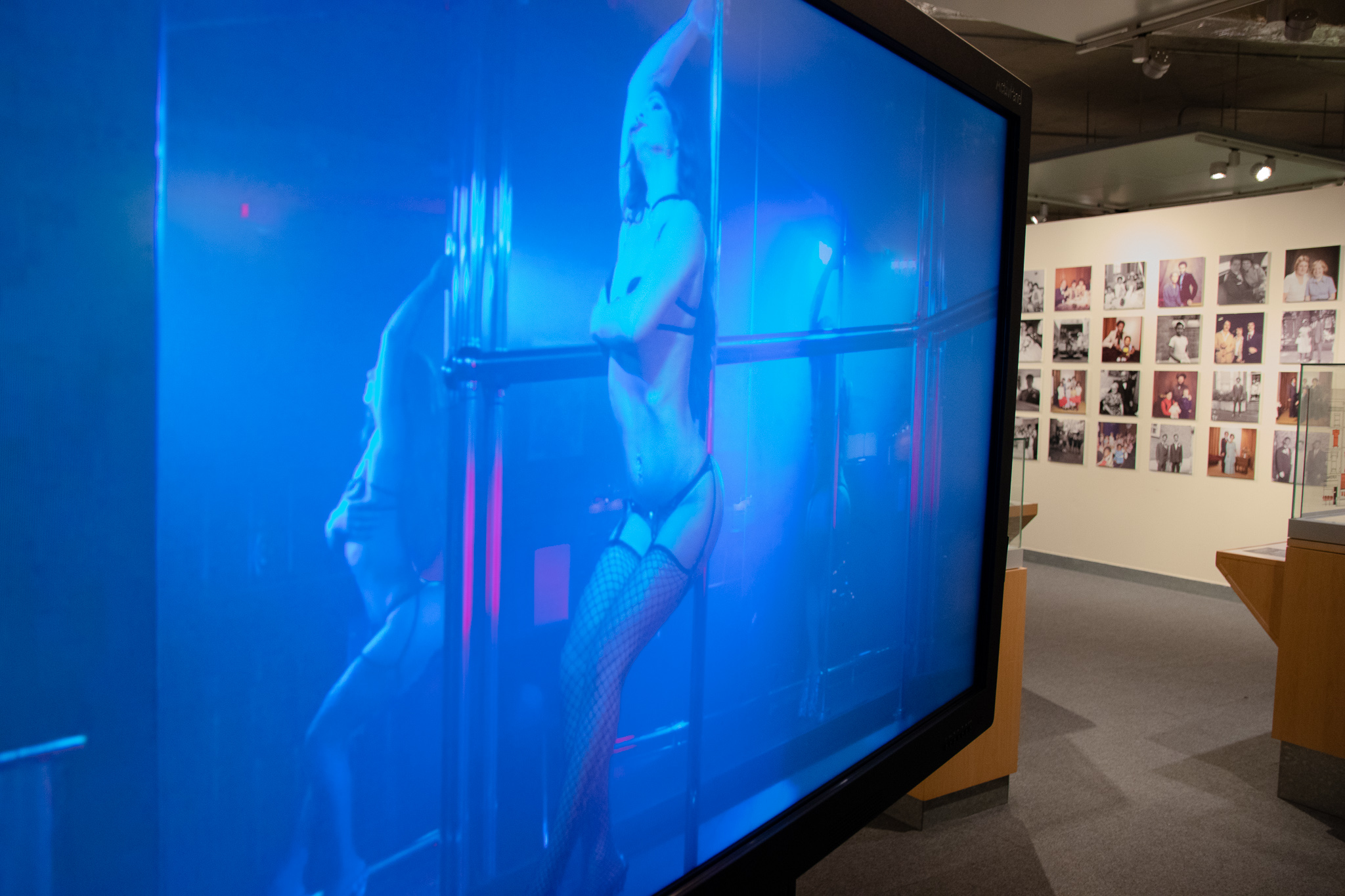 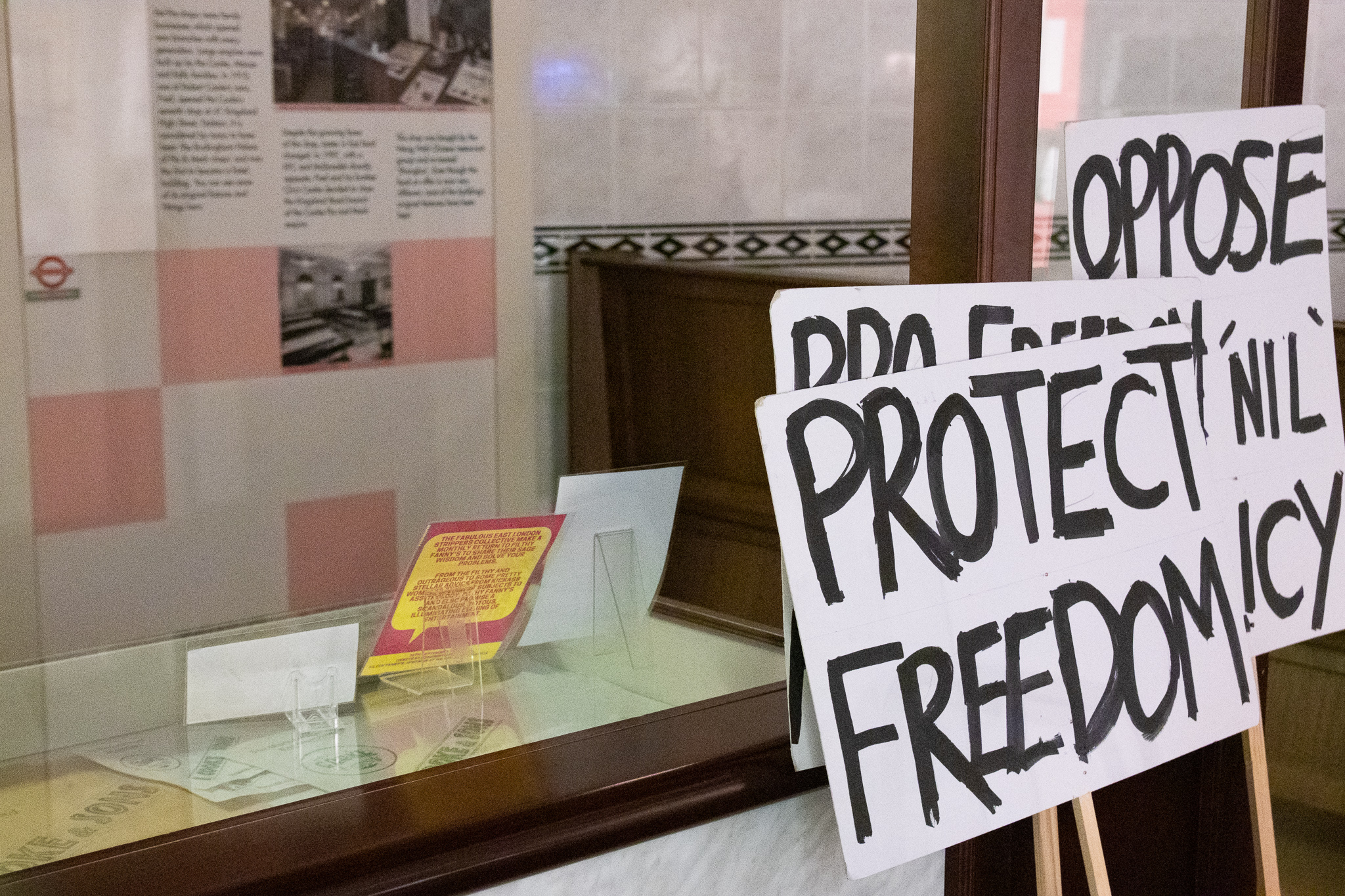 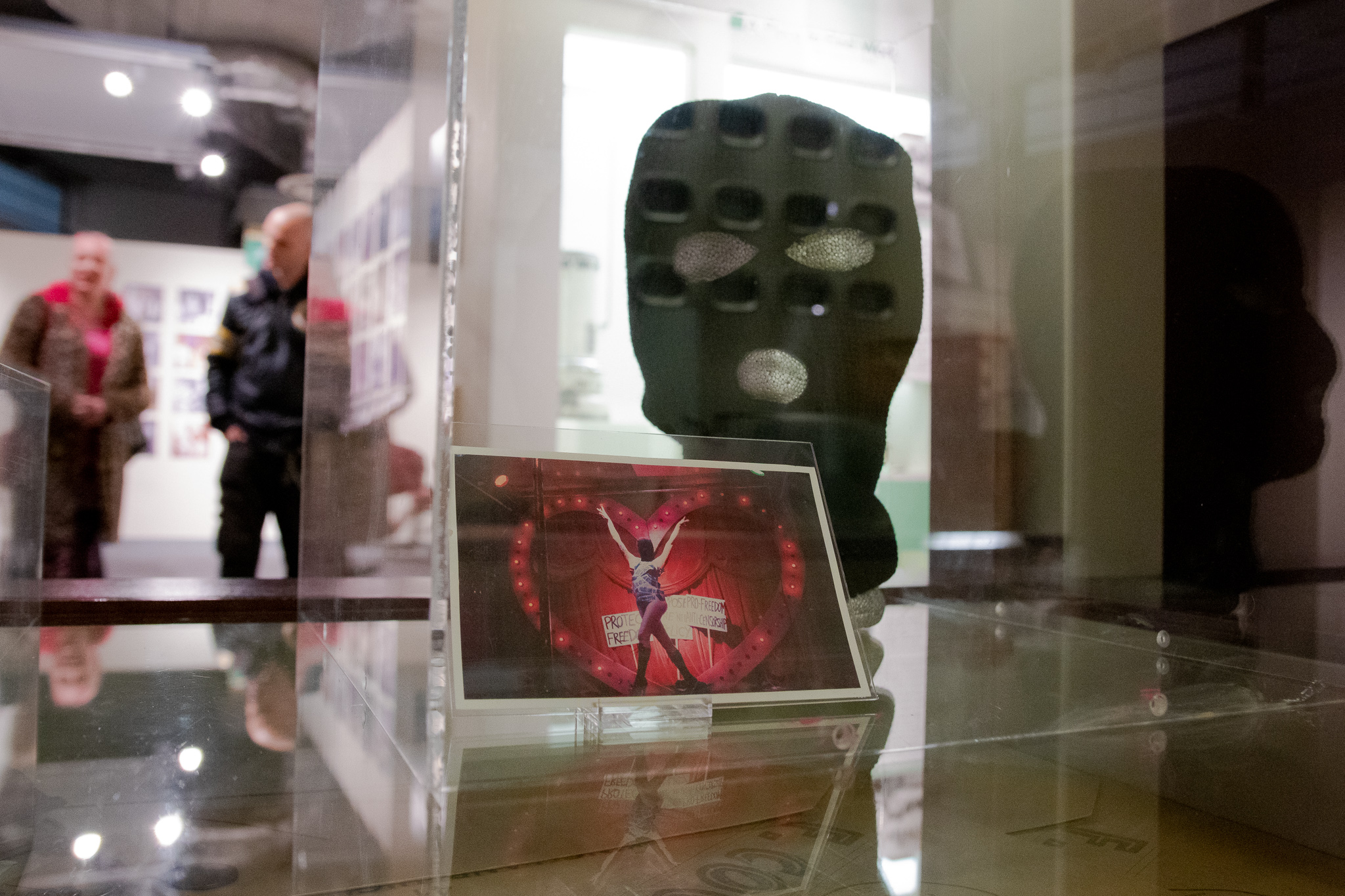 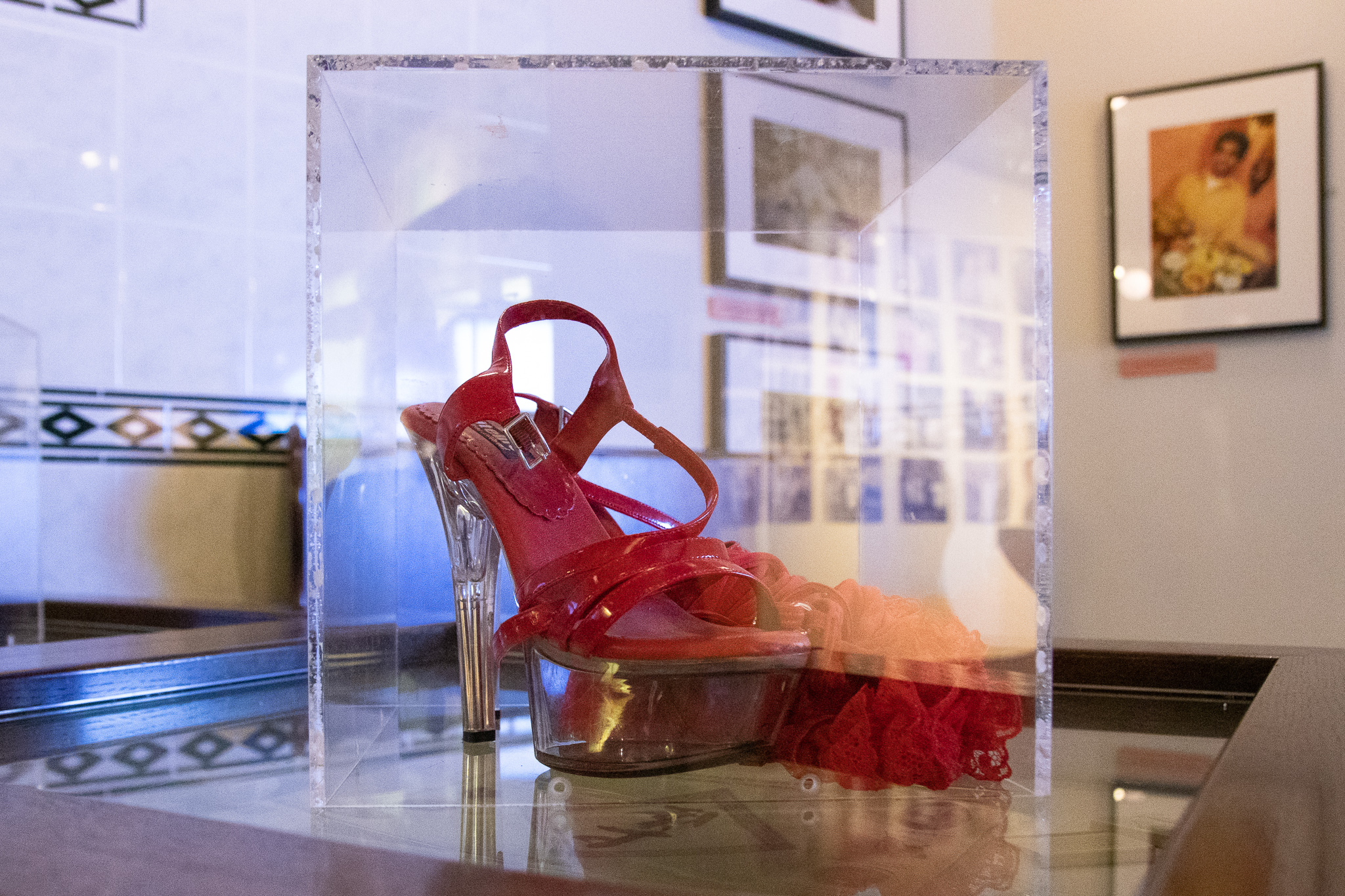 ‘ELSC are a group of feisty, articulate, and fiercely independent women who also happen to be strippers – challenging stigma and smashing stereotypes!

The large screen features a short film made by: members of ELSC made for Nowness, based on ‘letters strippers receive from clients’ ‘filmed in the White Horse in Shoreditch which is now sadly lost.

‘It was the best venue to work in, run by the typical East End matriarch with three generations of the family running the pub. Pauline was the grandma, Sue the daughter and Emily the granddaughter and it was like going to work with your 33 best friends all the time. It was great!’

In 2011 Hackney council introduced a ‘nil’ licensing policy on strip clubs, sex shops and sex cinemas despite opposition 66 per cent of people who took part were in a public consultation being against the ban. Dancers held demonstrations outside Hackney Town Hall against the ‘nil’ licensing. As a result of the ban many work places were lost.

ELSC came into existence to foster the community of those working in clubs and to organise politically. Other objects in the display: protest signs from the demonstrations by dancers outside Hackney Town Hall. Photo of the demonstration. A balaclava and police tape from the ELSC performance ‘banned’. Flyers from ELSC events. In case it hadn’t occurred to you some strippers are queer.’ 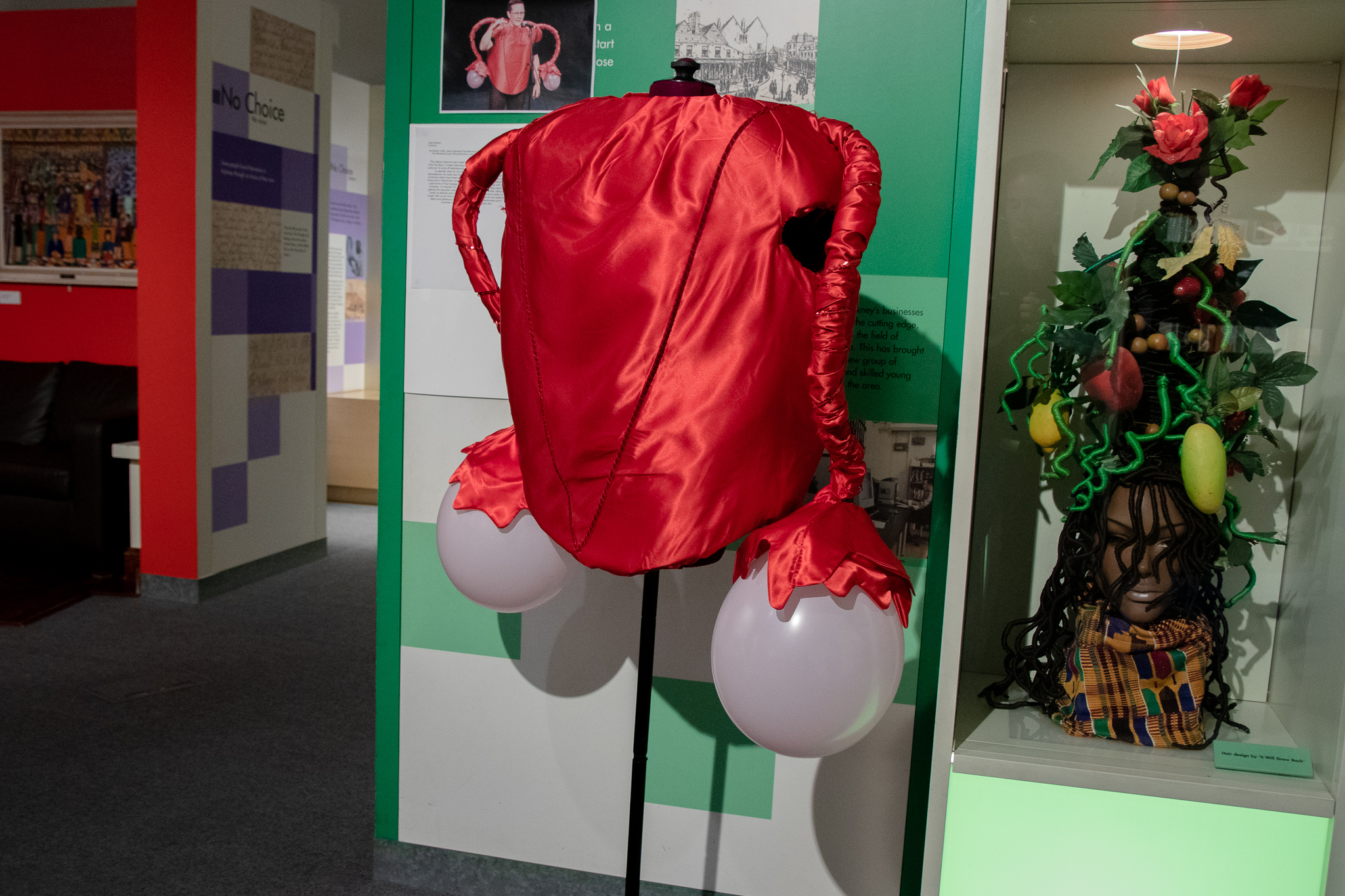 Jason organised Transfabulous Festival of the Arts between 2006-2009, the festival was a focal point of the Trans community. His performance ‘The Menstrual Cycle’ was part of the festival.

‘This uterus costume was made for me by Lucas McKenna with help from his Mum. I’d been planning a comedy routine about the menstrual cycle as I’d come off testosterone and was undergoing fertility treatment, so periods were on my mind. I was also aware that, without testosterone, my body was changing again and wanted to embrace that somehow rather than freak out. I performed the routine in London a few times and in Stockholm once. I videoed the Stockholm performance and used some of that footage in my feature documentary A Deal with the Universe. I’m thankful for Jet Moon’s restoration and curation skills in getting this beautiful costume off the top of a dusty wardrobe, fallopian tubes re-stitched and into a safe place. Lucas McKenna is sadly no longer with us but this is uterus costume is a testament to his  creativity, talent and generous support of queer artists and performers and I consider myself very lucky to have known him 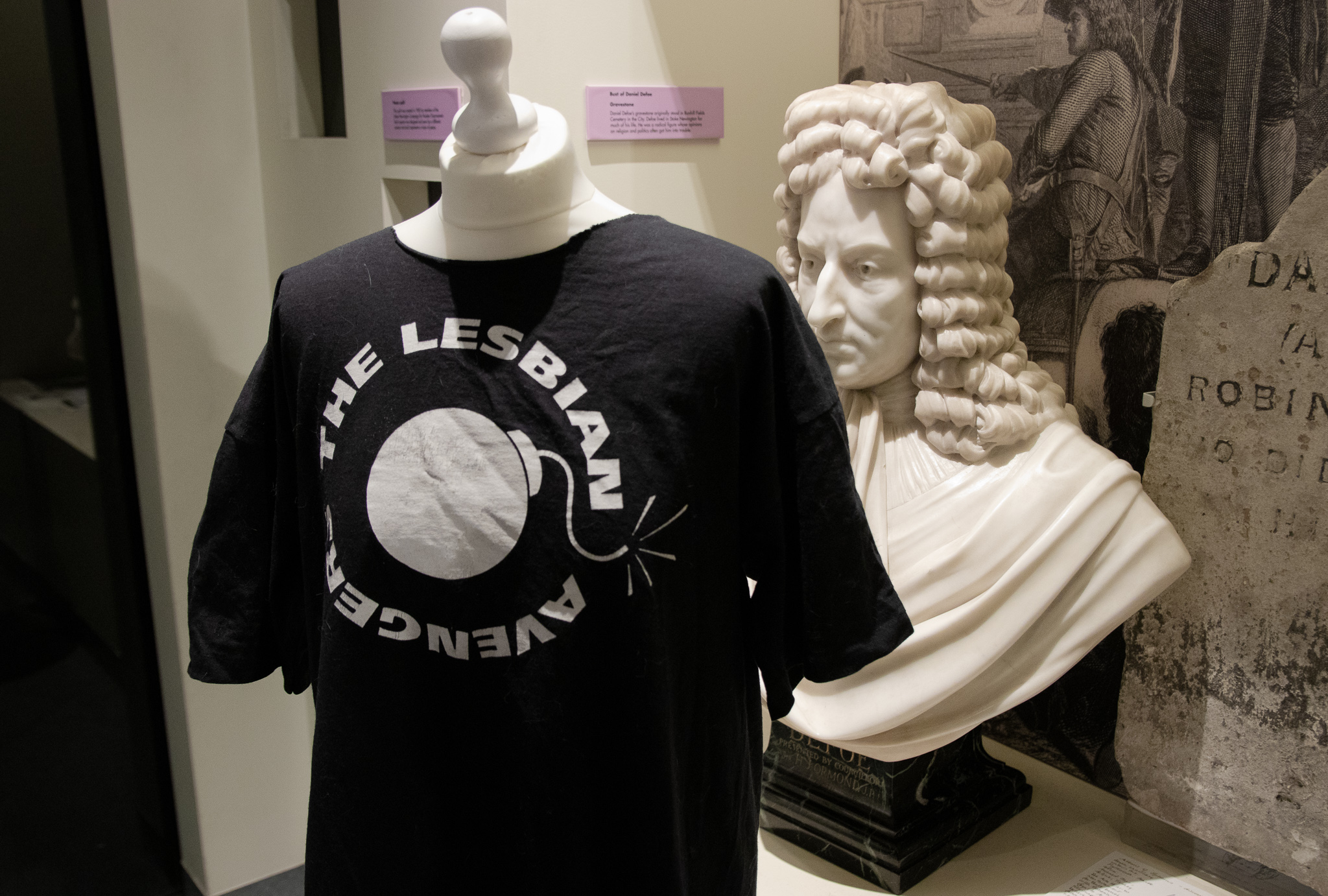 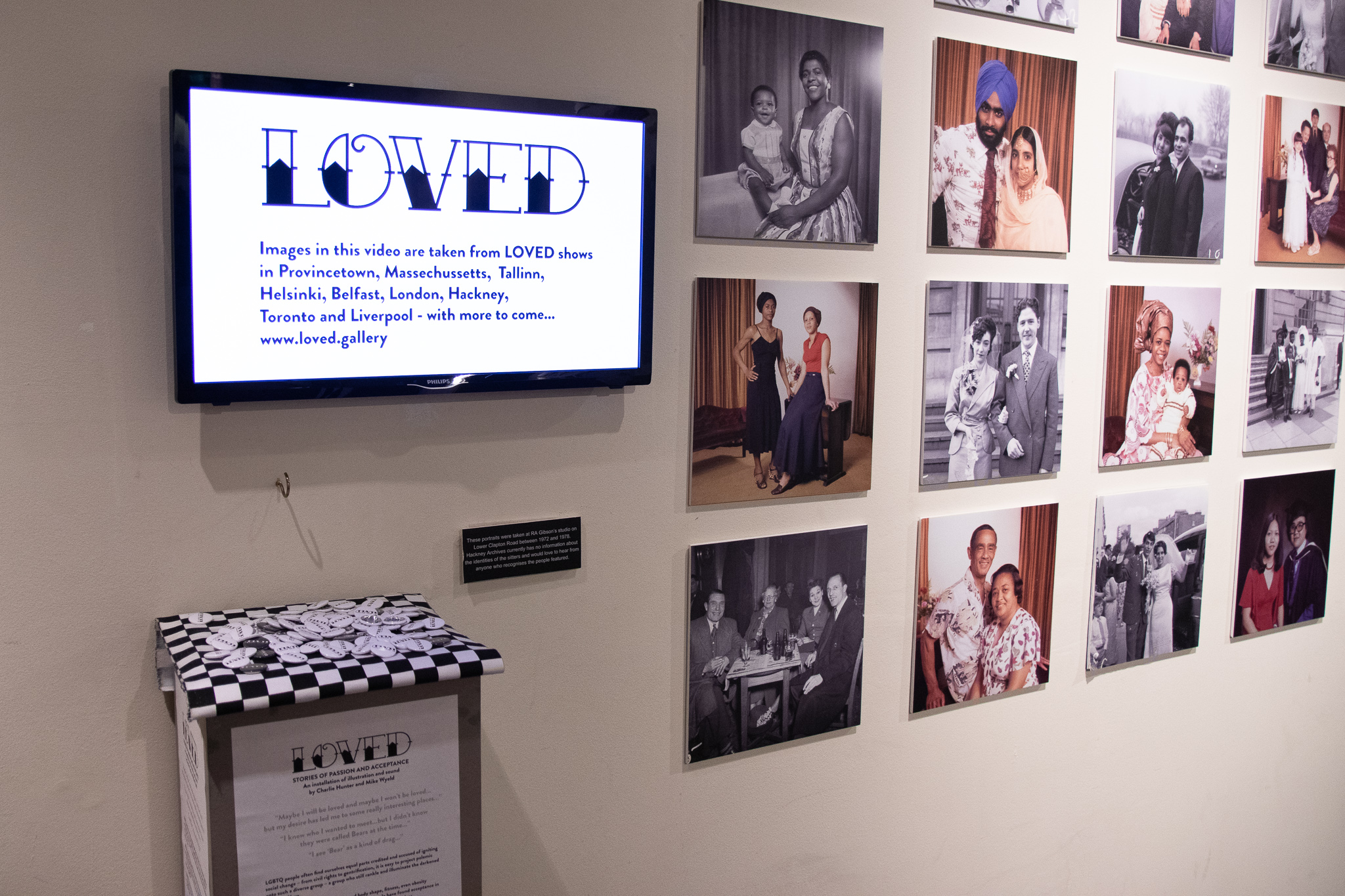 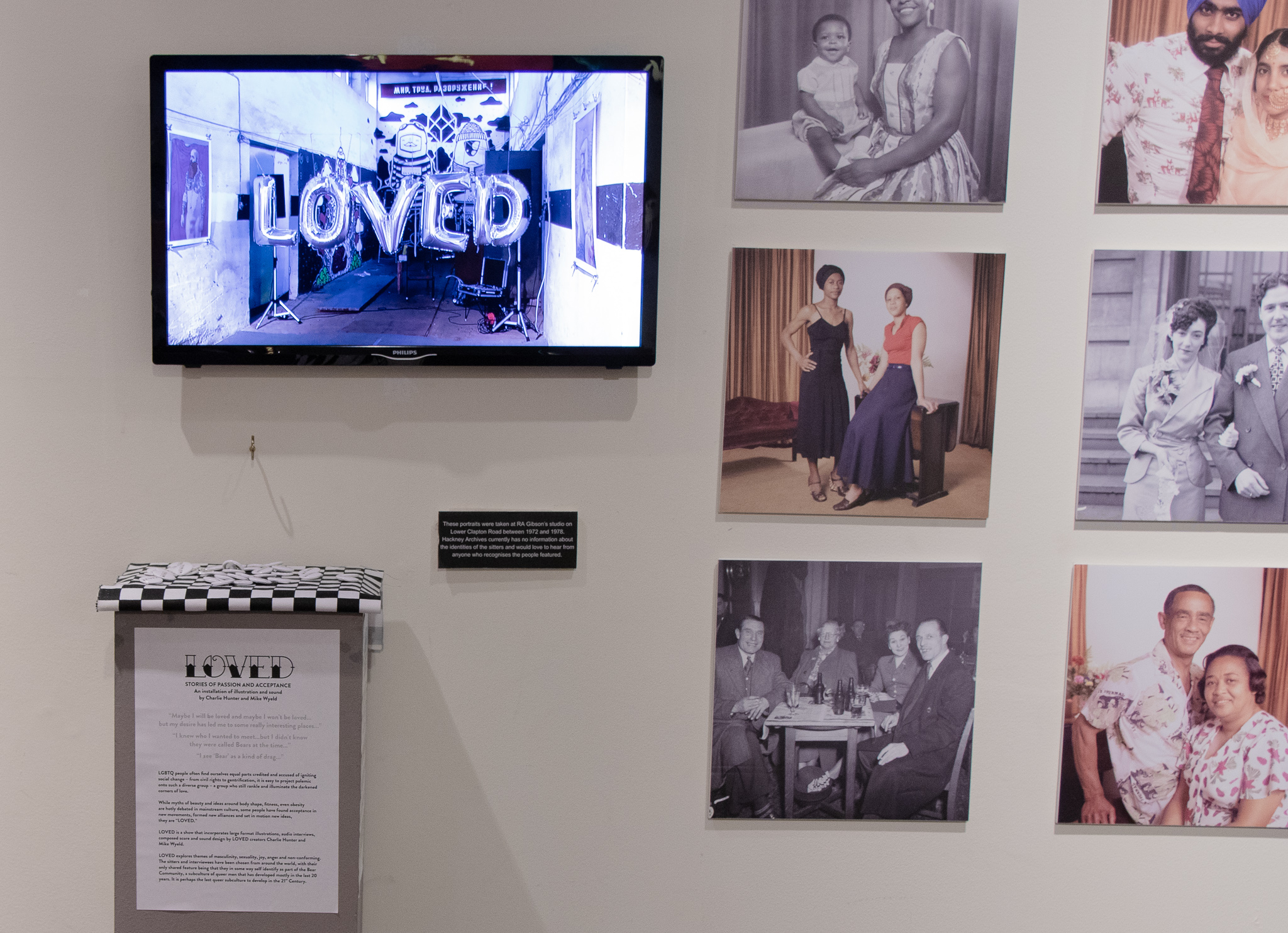 LOVED is an installation by illustrator Charlie Hunter and sound designer Mike Wyeld.

LOVED documents and explores the global phenomenon of the Bear Community, using it as a lens on the LGBTQ+ world – finding global and local incarnations and edges.

While myths of beauty and ideas around body shape, fitness, even obesity are hotly debated in mainstream culture, some people – including ‘Bears’ – have found acceptance in new movements and set in motion new ideas – they are LOVED. 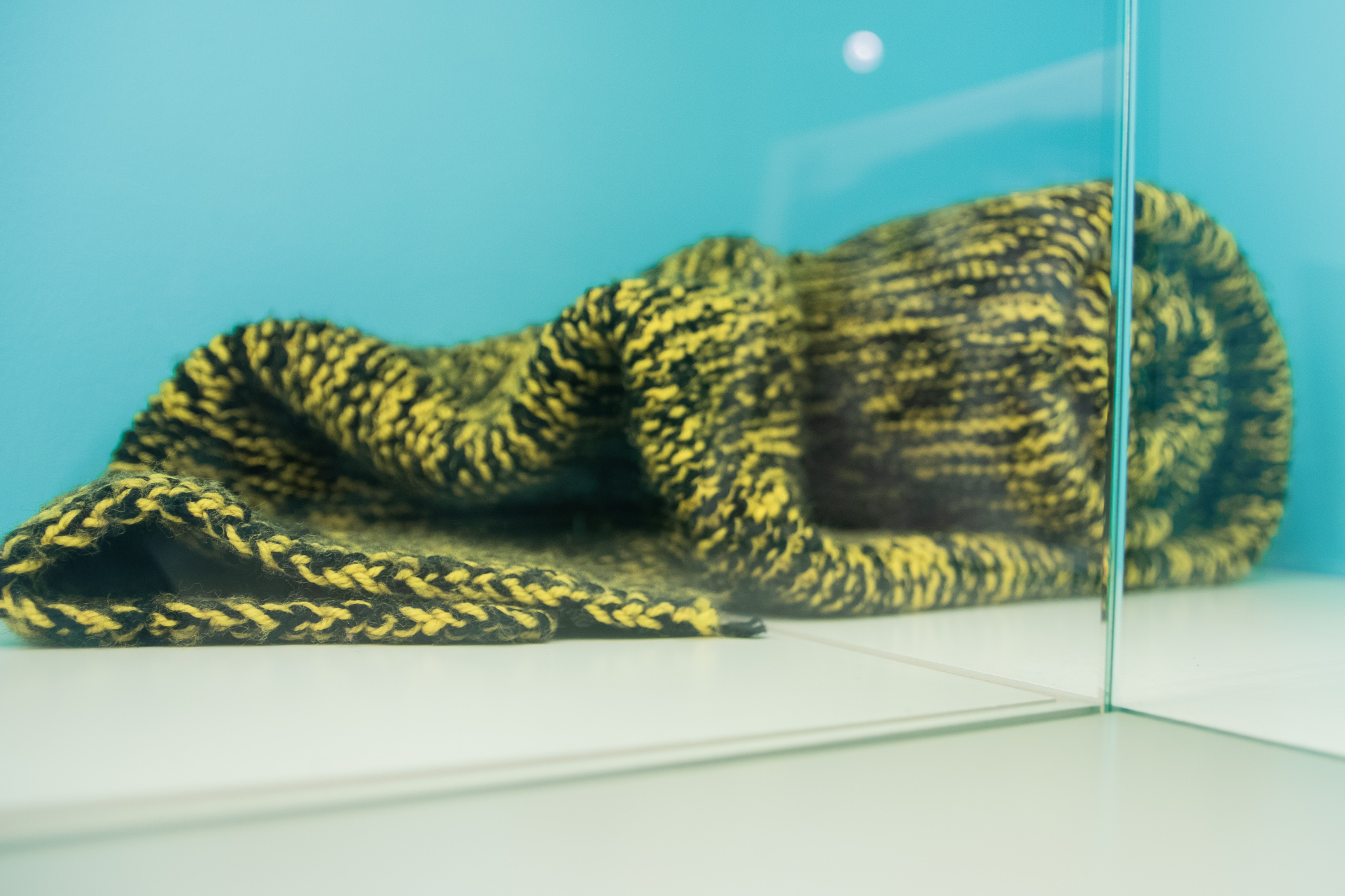 ‘When you’re cold and lonely knit yourself a scarf, then go outside and be showered with compliments.’ 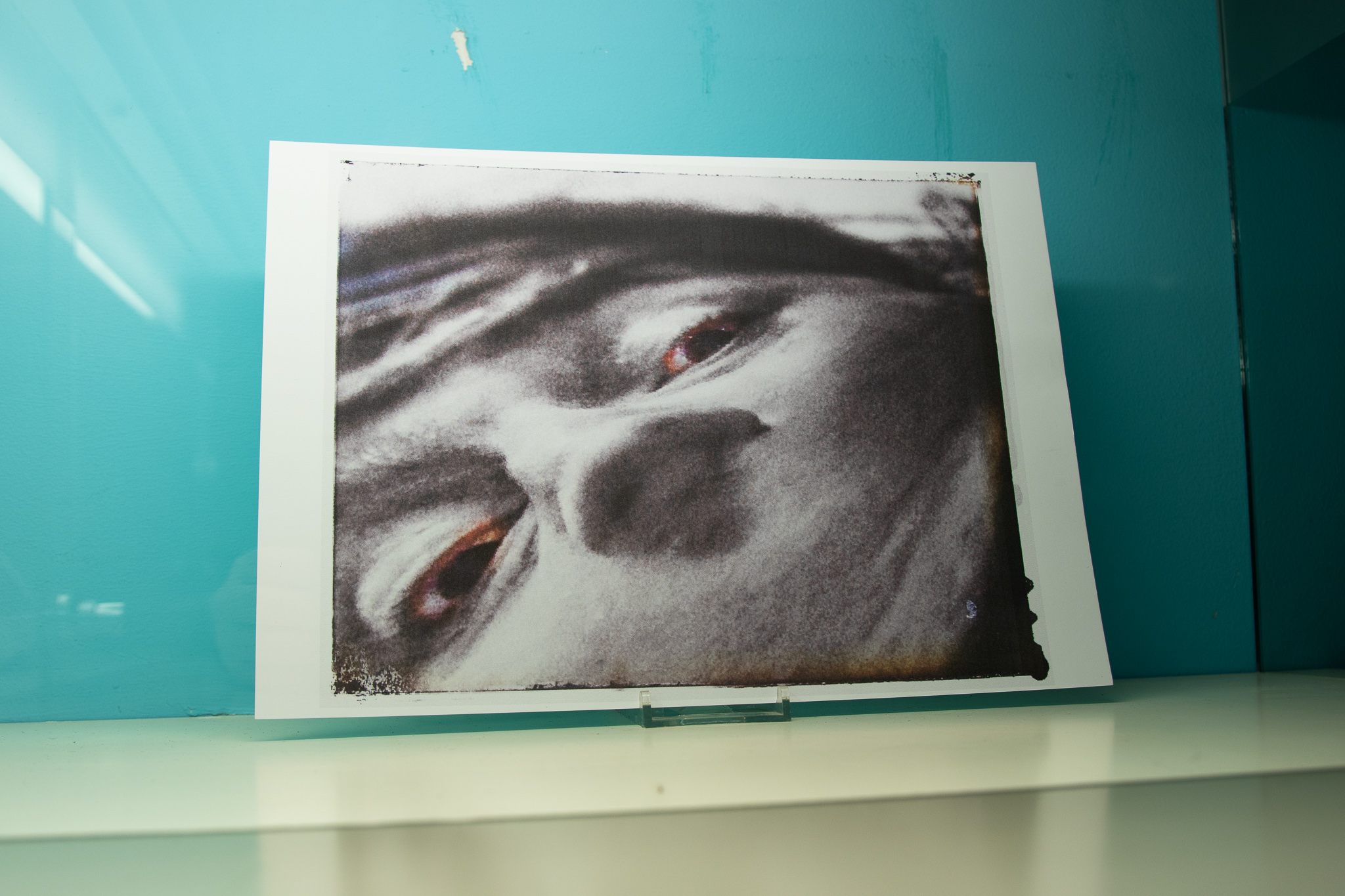 ‘On the day I posted this online, it was despair and delusion. A psychotic break. I thought everyone was dead and I was truly in hell. The people who were there at the time have told me I was screaming ‘the sky is on fire’ and ‘everyone is dead’ I manipulated the images when i came back to this reality to show the other side that I had just experienced.’ 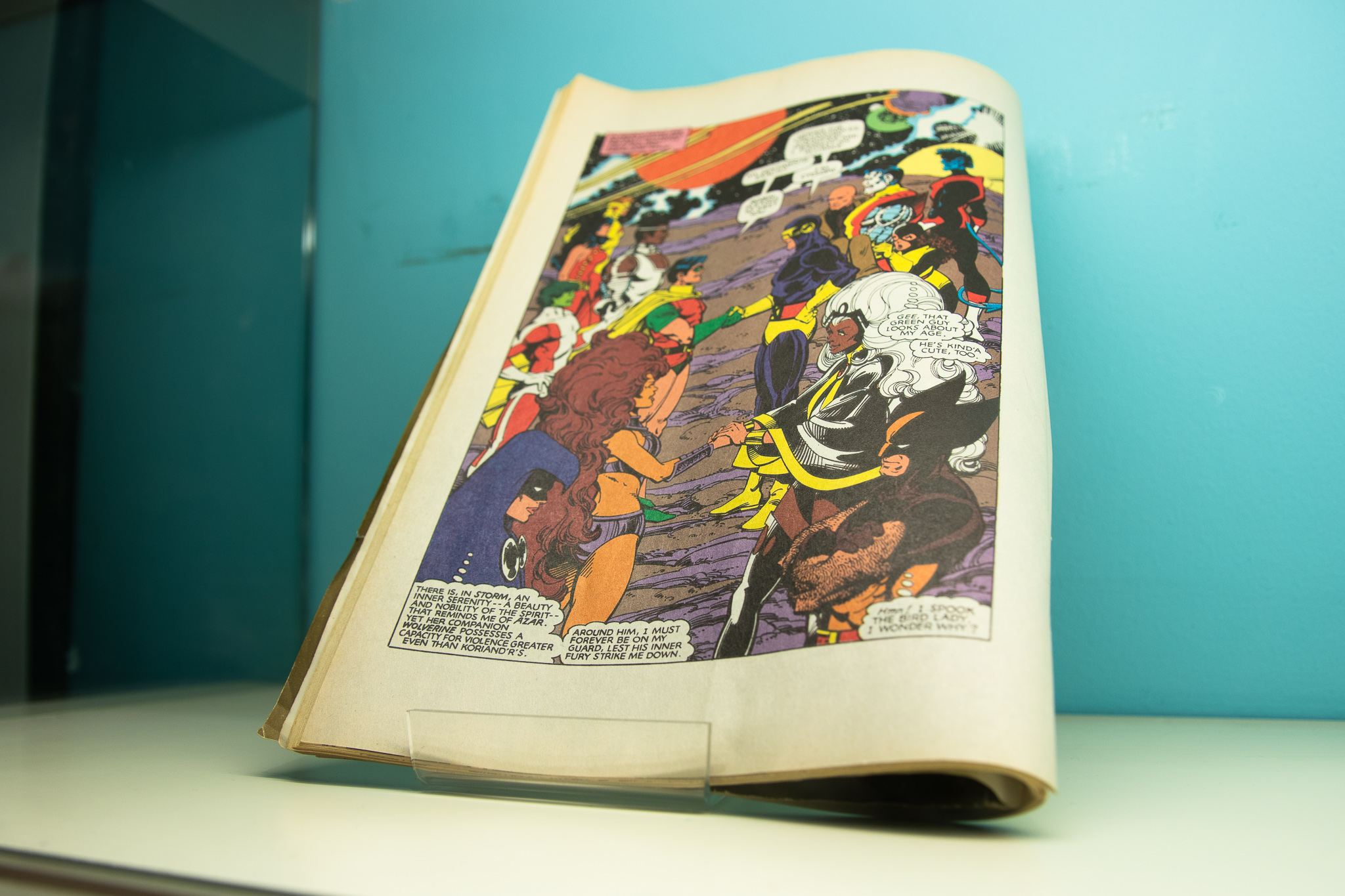 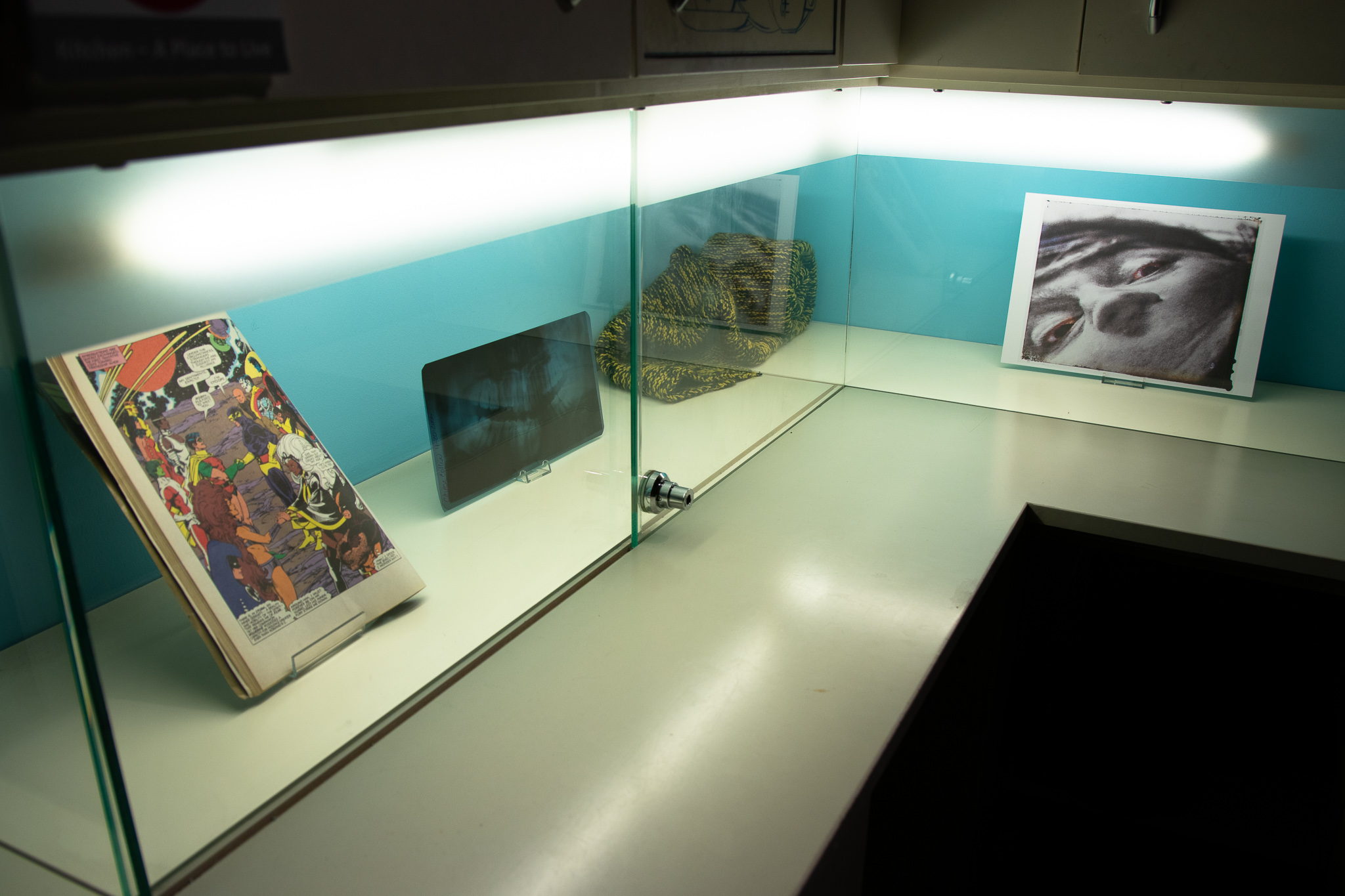 ‘I started reading super hero comics before starting primary school and have been reading them ever since. They introduced me to complex ideas at a young age which on further reflection seem quite adult. Themes such a magic versus science, time travel, multi dimensions, social prejudices, secret identities, extraordinary abilities and powers that opened up an entire alternate world to me. These super heroes were human forms of perfection but I never saw them as sexualised and recognise that now as my asexuality comes to the fore. I was much more interested in the story arcs and the unbelievable things these characters could do. These comics were my inner world providing a freedom and outlet throughout my childhood into adulthood. They have become intertwined in times of mental distress. When I became psychotic it was a world I retreated into. Being relatively stable I remember living the world of super heroes and hopefully it will be a warning if I am to become ill again. I still collect comics as a treat for myself and find them a source of comfort and continuity.’

These zines have been made by members of Project Indigo, a local youth group. Sharing experiences of anger and dreams of safety via love and magic, these zines tell some of the stories of what it’s like to be young and queer today. 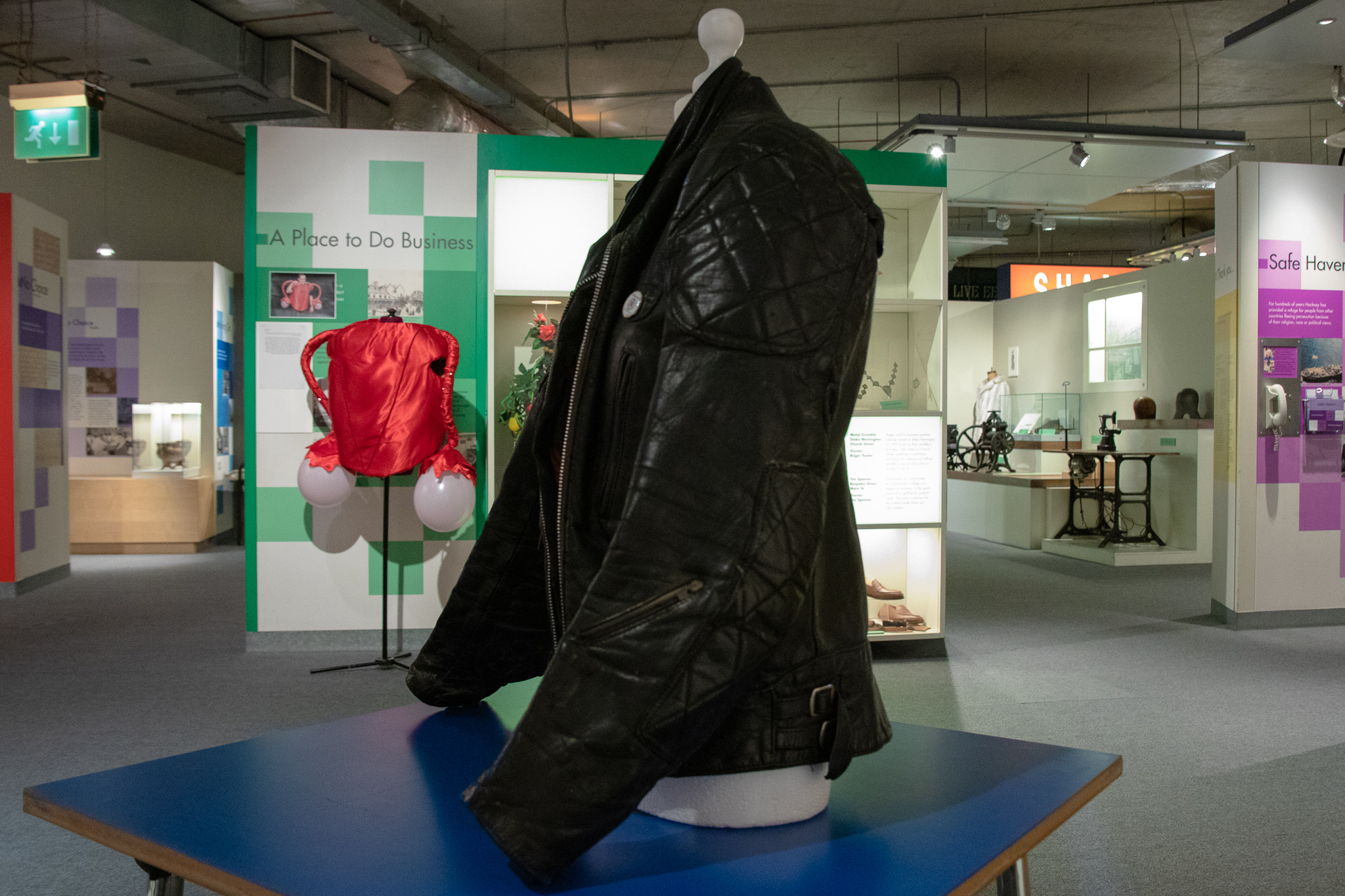 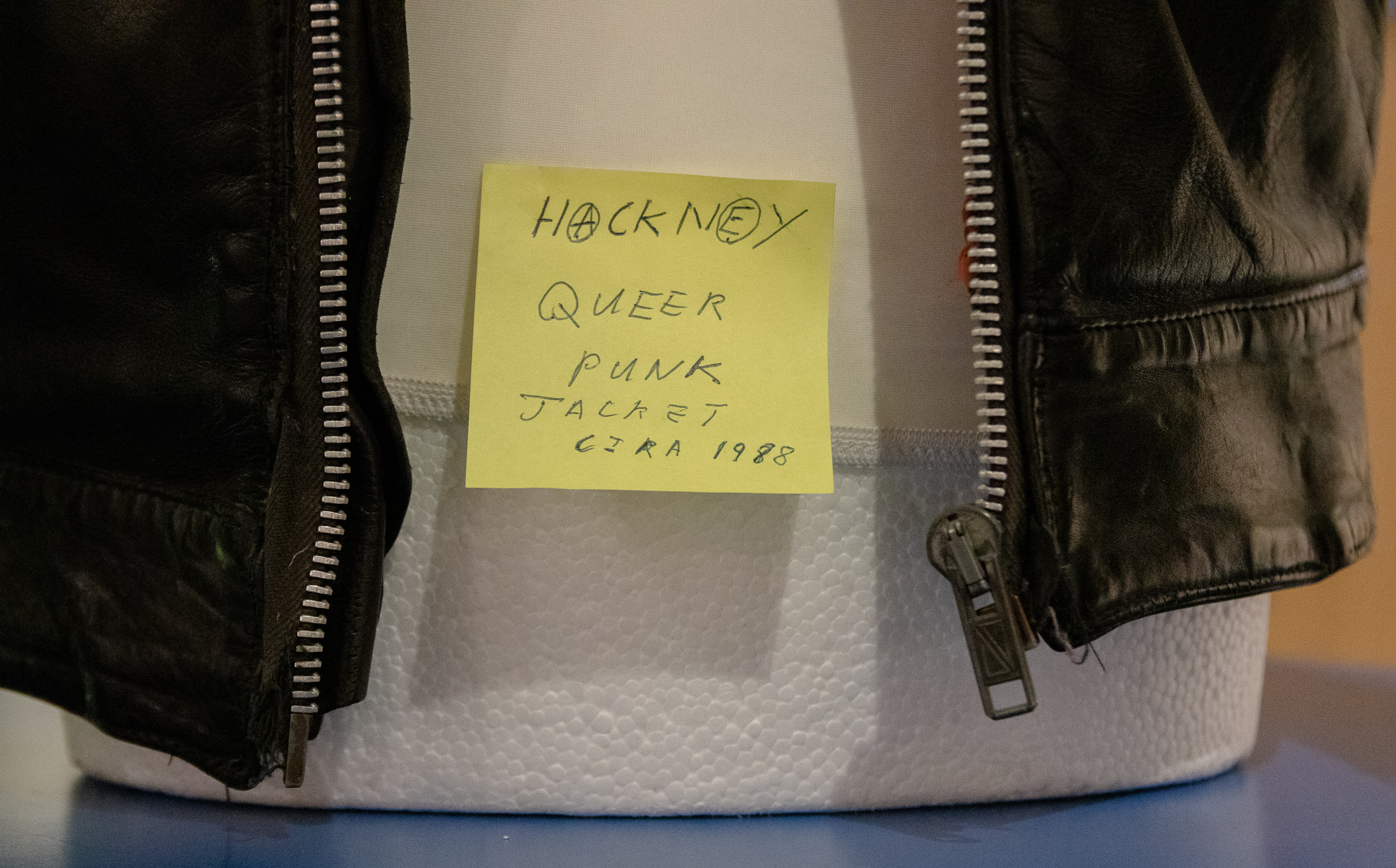 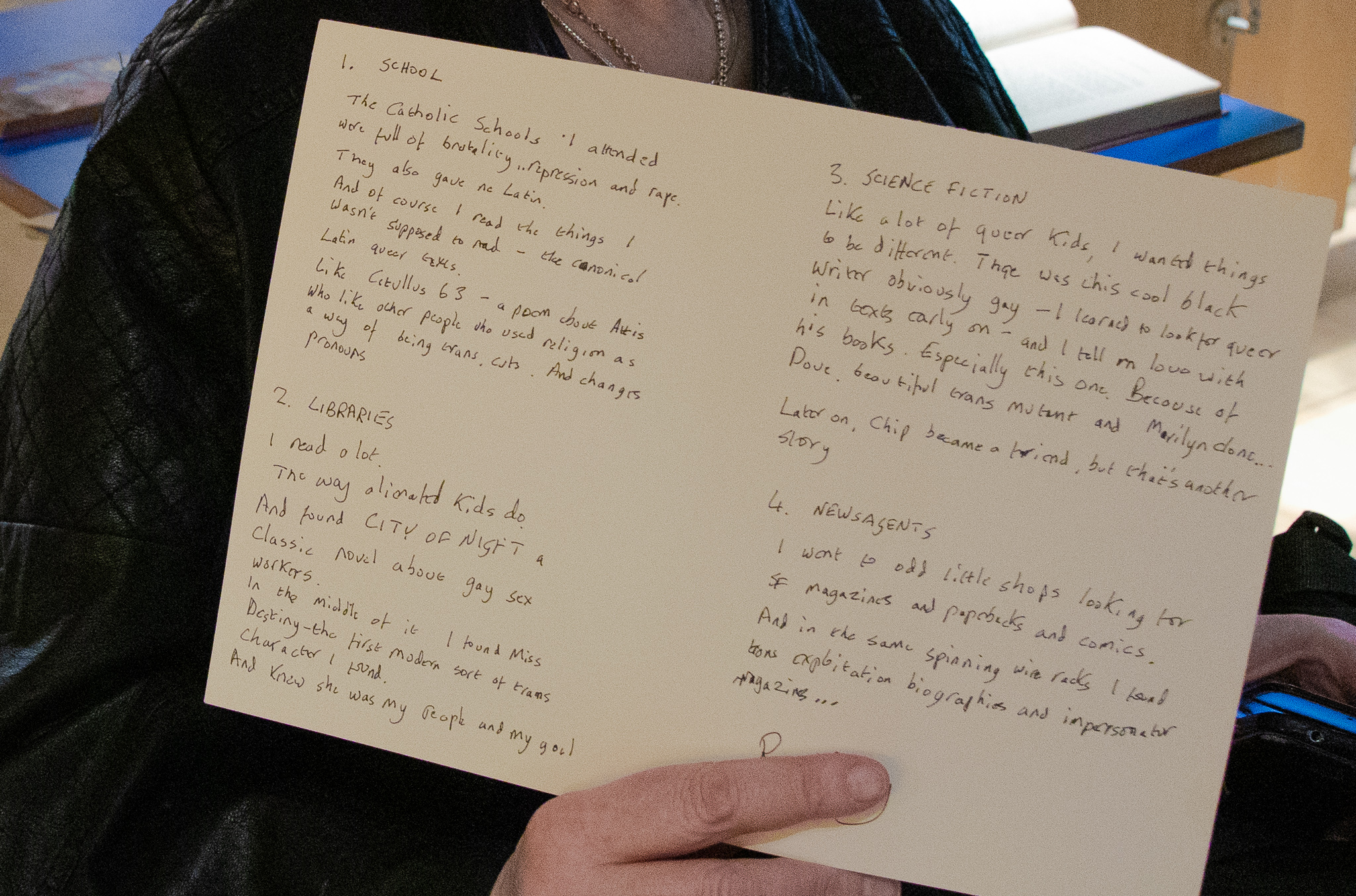 ‘Womens Autonomous Nuisance cafe. A Diy vegan womens cafe loosely started in 1999, that ran for 8 years in squatted venues and autonomous spaces in and around Hackney. (Big up and rip – Toxic Planet squat, lordship road; Shacklewell baths, shacklewell lane; The Radical Dairy, Stoke Newington; The boys club, Dalston; the China man, Dalston lane; Ramparts, Rampart street.) After a two year break it is now in its 7th re-incarnation and currently situated at Passing Clouds, we run the last wednesday of the month. The cafe aims to celebrate difference and diversity, be that of sexuality, cultural background, class, gender and ethnicity through sharing time honoured rituals of food preparing and eating, making music, and having fun. Women for us is an inclusive, fluid and self defining category and the space welcomes non binaries, transmen who still have links to womens movements and transwomen. ‘

‘Once a month I would share the idea and put a call out to everyone on the email list and who ever resonated with it, wanted to perform, cook, skip or whatever would respond. An email group/team was created for each month and then people just got on with what they wanted to do, liaised with who they wanted to liaise with. I would make a flyer. There were no committees or meetings or organisational structure. We created a space with an empty centre where anything could happen and nobody owned.’ – Caro

This is my Klub Fukk membership card. I was aware of this queer-friendly kink space for years without finding the courage to go. That came much later, when I was befriended by a dyke who lived on Albion Road in Stoke Newington. I gradually came out of my isolation through spending time at her large shared house and its queer rotating cast of characters. She persuaded me out as she’d been a regular at the club, which had changed hands and spaces over the years and at this point it took place in the Hoist, under the railway arches in Vauxhall Grove. It was all metal grilles, cement stairs, thick shadowy corners. For me it was the first place where queerness, kink and  filthy sex blended with the experience of being seen, of having an interest taken in me, of finding the people who were glad I was there. I wish I hadn’t waited eight years: the Hoist was one of a dwindling number of spaces where such nights were possible and it was under sustained pressure from developers. By the time the membership on this card expired, the Hoist was gone. Klub Fukk with no home is on extended hiatus but I’m not able to say, or feel, that it’s gone too. We’ve since found other queer non-kinky spots in Hackney: the Glory on Kingsland Road,  Fringe! Queer Film Fest. The friendship has endured and grown. Queer life in London continues, however precariously, to be an affair of places. With some work it can be an affair of people as well.

Back to D.I.Y Histories